Like other recent weeks, the last several days have been chock-full with online branding numbers. Here are nine that we found particularly interesting.

1. AR booms
Digi-Capital’s report said that the mobile augmented reality space will have more than 1 billion users and total $60 billion by 2021.

2. Fraud falls
There’s actually good news on the digital crimes front. Fraud fighter White Ops and the Association of National Advertisers studied 49 ANA members and their digital advertising activity between October and January. From the research, they expect ad fraud to decline by about 10 percent globally from $7.2 billion last year to $6.5 billion in 2017.

3. Sonic YouthTube
Adweek teamed with Defy Media to ask a group of nearly 1,500 people ages 13 to 20 what they think about everything from social media platforms to digital video to the new breed of online celebrity. Of all the data points from the survey, here’s the loudest—95 percent of the youngsters are on YouTube and half of them said they “couldn’t live without” the video platform.

4. Programmatic? More like cash-ammatic
According to Digiday, U.K.-based newspaper The Telegraph has lifted  revenues by 70 percent in the last nine months thanks to header bidding, which is a programmatic system that lets multiple parties bid on a particular slice of ad inventory at the same time.

6. How to win friends and monetize people
In a global study, Influence.co analyzed the sponsored post rates and engagement rates of 2,885 Instagram influencers, learning that a jump from 100,000 to 1 million followers will make them 5.5 times more money for each sponsored post. Interestingly, Instagram influencers in the United Arab Emirates charge the most per post at $274. Check out the full report here.

7. What a teen would do
Speaking of the Logan Pauls and Lilly Singhs of the world … 54 percent of teens would choose an influencer for branding purposes over more traditional creative if they were the head of advertising at a company, a FullScreen report found.

8. DON’T DO THIS!
Some email marketers—especially in the political sphere—believe that subject lines in all caps, such as URGENT: PLEASE READ, will drive response rates. But according to email player Boomerang, which analyzed 300,000 emails, all-caps subject lines received a reply 30 percent less often.

9. There’s no hole in the value of this stat
Speaking of email, here’s a bonus stat for donut marketers. National Donut Day is June 2, and according to Yes Lifecycle Marketing, the average email open rate when “donut” is in the subject line is 9.73 percent. However, when the ring-shaped, sweet, fried cakes are given the “doughnut” spelling treatment in subject lines, open rates increase to 10.82 percent.

Bonus stat I: Get it together, folks
Brands such as Pepsi, Shea Moisture and Nivea have infamously had their troubles recently connecting with multicultural youth, and reaching this audience will increasingly become more important. A joint Mitú-ThinkNow Research study found that multiracial Americans will account for 25 percent of population growth by 2040.

Bonus stat II: Boy, these dudes cannot spell
Despite making frequent searches for deodorant online, many men can’t spell the term. The keywords “deodorant,” the misspelled “deoderant,” and “antiperspirant” accounted for more than half of the top 20 most expensive search positions, according to AdGooroo, a Kantar Media company.

Here’s AdGooroo’s full rankings, which looked at the top 20 consumer product keywords based on the average cost per click that brands paid to sponsor them via U.S. Google desktop text ads from November through April. 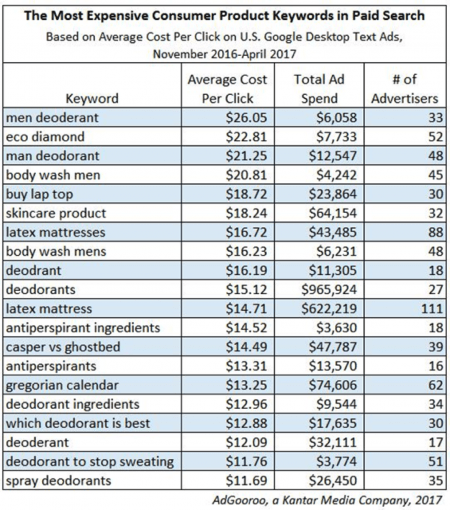 Article Source: http://www.adweek.com/digital/9-particularly-fascinating-digital-marketing-stats-from-this-week/
On – 26 May, 2017 By Christopher Heine